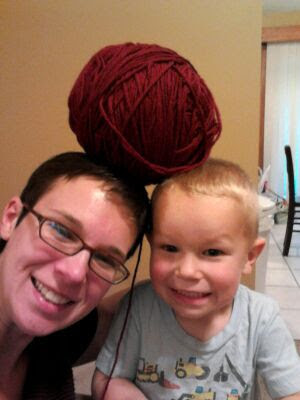 In this episode, the Prairie Girls want to go cast-on crazy! Susie puzzles over what to do with a couple different skeins of variegated yarn and Danie enjoyed a Malabrigo Nube birthday bonanza.

The girls mention several different shawl patterns including  Lintilla, Magrathea, Trillian, Emma’s Shawl, and Henslowe, and hat pattern End of May (and its matching mittens).

We want you to answer a burning question: If you were to knit socks for a celebrity, who would it be and why? To enter to win a skein of Malabrigo Rios in Archangel and a set of stitch markers handmade by Danie, please join our Ravelry group and post your answer in the contest thread. We’ll leave the thread open through September 29, 2013, and will announce the randomly-selected winner on that week’s podcast.

Danie is experiencing the sock knitter’s paradox where the heels feel further and further away the closer they get on both her Copper Socks and her Slither/Serpentine Socks. She is also started knitting an owls sweater from a ball of yarn that is bigger than her head.

Susie had a son of a stitch moment when she realized that the leg of the first of her Dragonfly Toddler Socks was too short, and the short row heel too shallow and ripped them out. She has barely cast on for the second iteration, but can’t wait to finish them to do a monthly wear report suggested by a lovely listener. She also cast on the Elizabeth Shawl using yarn unearthed from her recent stash review.

Danie’s Stormy Cloud handspun will soon be shining in an Ione, and Susie is finally casting on the Holloway Pullover.

Danie had a fantastically yarn-y birthday! She received a skein of Malabrigo Lace in Cuarzo, a skein of Regia Highland Tweed in , and Malabrigo Nube fiber in Arco Iris and Solis.

The girls saw Mortal Instruments: City of Bones – a terrible movie based on a series of books by Cassandra Clare that they both really enjoyed. The highlight was spotting a knit blanket fairly early in to it. Susie thought it might have been seed stitch, while Danie thought more linen-y stitch.

Danie has a big thing for little sticky notes.