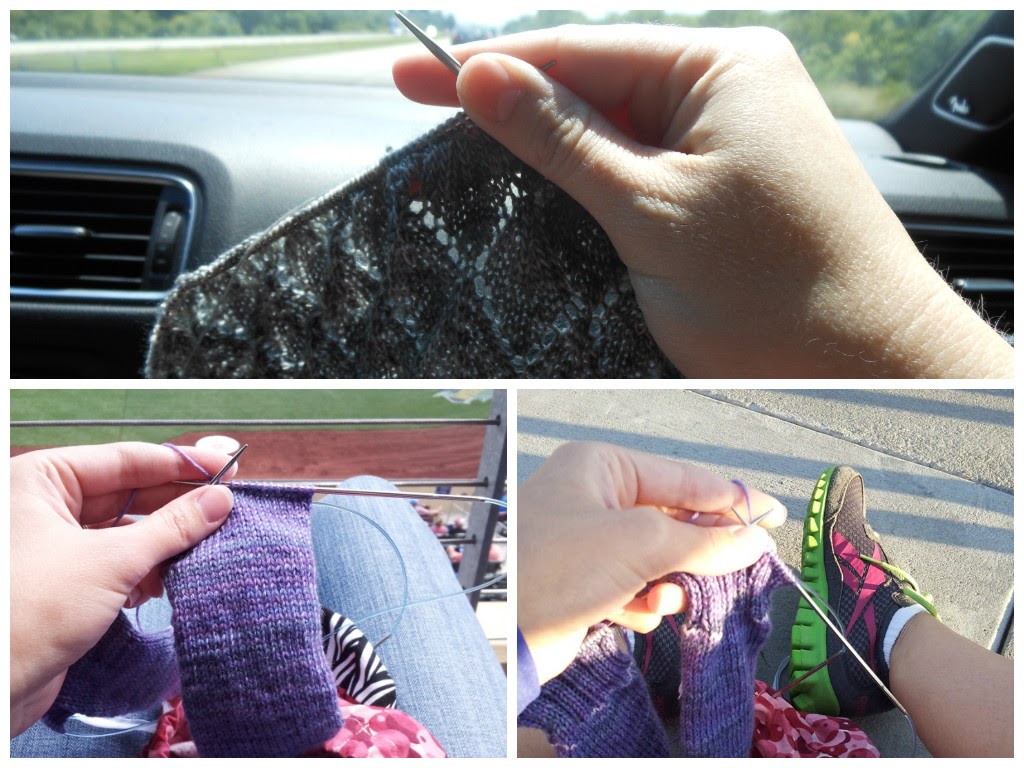 In this episode, the Prairie Girls talk about cooler weather and knitting on the go. Susie runs the gamut of emotions when it comes to her knitting, and Danie has sock questions.

When talking about Nebraska’s sneak-peek at fall-ish weather last week, Danie mentions the Galileo mittens, and Susie the Transition Gloves which are really fingerless mitts.

Susie is still working exclusively on Kiku. It was a roller coaster of a week, with highs and lows, but she thinks she’s inching slowly back to a high. She’s no longer certain that she’ll have to do extra chart repeats, to satisfy the 800 yard Camp Loopy Project 3 requirements, which is good because she’s ready for it to be off the needles. She’s still slightly worried that it will be too small for her, but Danie very kindly volunteered to take it off her hands if that should be the case.

Danie’s progress continues on her Purple Haze socks – the yarn for the afterthought heels has been knit in and she is working up the legs. She has been thinking about future sock projects, and is wondering about determining stitch counts based on the type of sock. Susie tried to answer, but wasn’t a whole lot of help. If any listeners have advice, please do let us know!

Danie also picked back up Dreambird, and is very glad she took detailed notes as to where she left off as it’s not the easiest pattern to pick back up again after putting it down for a bit.  This is her first time knitting with Noro (Silk Garden in this case). Both girls agree that they love the colors but are less crazy about the thick-thin tendency and the bits of “stuff” that comes with Noro.

While watching a back episode of  Top Gear, Danie loved that host Jeremy Clarkson pointed out that he was wearing a “rather fetching hooded cardigan” that he picked up in La Paz, Bolivia.

The girls confess that they unwittingly used the Savvy Girls‘ segment title Confessions, so they’re re-naming this segment to “Truth.” (The period is important.)

In other truths, Danie admits that despite being Nebraska born-and-raised, she has trouble spelling “field”, and Susie has to stop and think every time she has to spell “prairie”. Which is a lot more often these days.