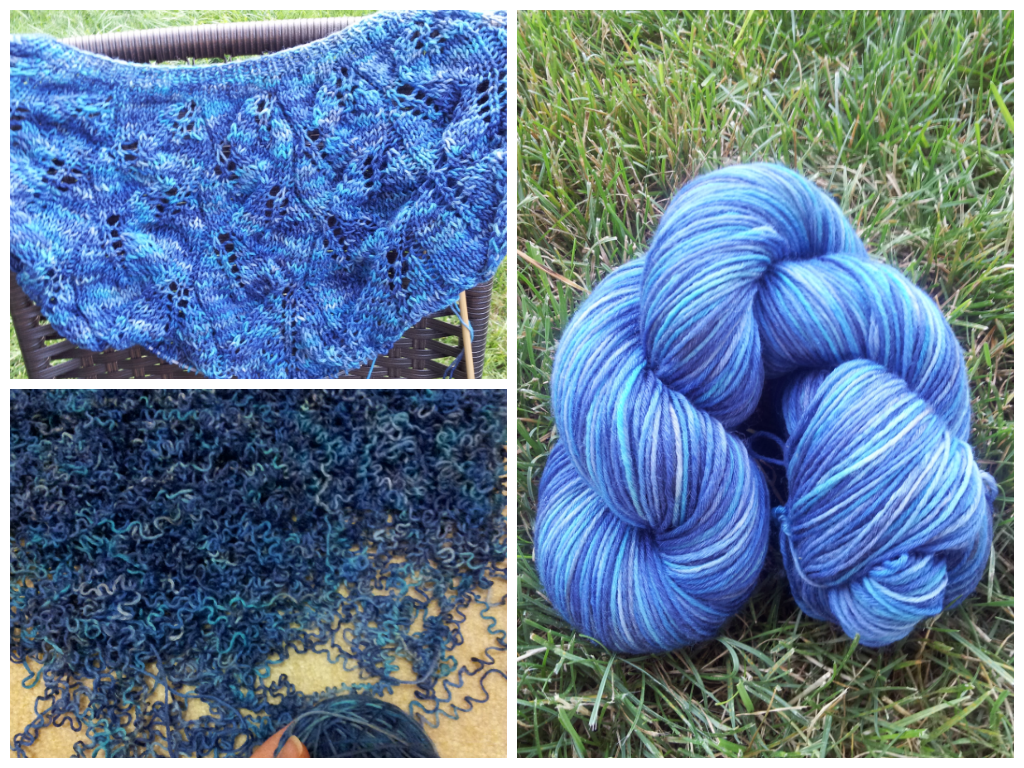 In this episode, the Prairie Girls talk about frogging. Susie fantasizes about her next favorite pullover, and Danie has her mind opened to the possibilities of a cardigan.

The yarn pictured above, and that Danie mentions in the frogging discussion, is from a local-to-us dyer, The Dyeing Arts, in the Goblin’s Elbow colorway.

Danie finished her Guacamole Dreams Op Art Blanket! She thought it might have come out on the small side, but after looking at it again thinks it’s a good-sized baby blanket. Susie’s eyes crossed at the thought of all that applied i-cord, but Danie found it to go fast, all things considered.

Susie is still knitting away at her Kiku – no surprise there. While not confident about finishing by the Camp Loopy Project 3 deadline, she is more optimistic about her chances than at this time last week.

Danie didn’t make a whole lot of noticeable progress on her Purple Haze Socks but is very much enjoying her sock-knitting journey. Especially the part where she finds herself picking them up  here and there to knit – like while sitting in a drive-thru at lunch.

Susie has gotten to the point with Kiku that she’s allowing herself to think of what she might want to cast on for next. It will likely be a sweater, and probably a pullover at that. She’s considering the Classic Pullover,  the Holloway Pullover (both from Amy Herzog’s Knit to Flatter), or Antilogy by Kate Oates.

Danie found Drafting: The Long and Short of It with Abby Franquemont to be both entertaining and educational.  Throughout the watching of it, she had several light-bulb moments that helped boost her confidence as a new spinner. It caused her to take a second look at her long-draw singles from Tour de Fleece and realize they’re not half bad.

Susie got giggly during last week’s episode of Major Crimes when they referenced not only knitting, but crocheting too.

A lovely listener posted in our thread in the Podcast Junkies group on Ravelry to let us know that the main character in the first two seasons of The Killing wore some great sweaters.

Danie is a sock knitter, despite swearing she would never enjoy knitting socks.